Born in New Zealand, the flanker was exploring rugby opportunities in Europe when Ulster signed him up in 2014, and that autumn he made a winning debut in the senior side. In 2015, injuries to Chris Henry opened the door to regular appearances at openside and he rededicated himself to the game and put in a series of energetic, robust performances. Irish-capped Reidy has since made over 100 appearances for Ulster, making him one of the most-capped players in the current squad. 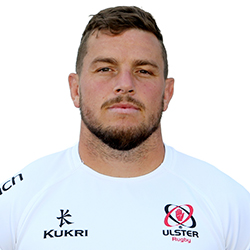