Five clubs in Ulster have been awarded prizes, sponsored by Bank of Ireland, having embraced the ‘Walk To’ challenge to collectively walk from Kingspan Stadium to every club in Ulster and back in just over ten weeks.

The challenge was open to anyone of any ability, and in addition to chasing down the steps total, we encouraged participants to support the spirit of the campaign, to:

The winning clubs have demonstrated that their activities aligned with the spirit of both the ‘Walk To’ and #NeverStopCompeting campaigns. #NeverStopCompeting celebrates the good that comes from competition, how it fuels us and connects us, and pushes us past whatever stands in our way.

Congratulations to the following clubs who have received £500 worth of worth of Gilbert Rugby equipment packs from Ulster Rugby:

Ards RFC was the club who accumulated the highest number of steps. Richard McNeilly and Paddy McGrattan both took the first and second spots for most steps in the male category. Paddy also undertook a walking challenge alongside Stephen Nutt from Kingspan Stadium to the home of Ards RFC, Hamilton Park on Friday 30th April.

Aidan Kee from Malone RFC took the top spot for most steps in the Under-18 age group. Aidan, along with his dad Colin, contributed over 600,000 steps to the ‘Walk To’ challenge. Malone had 12 participants in total, who helped put the club in 2nd spot overall.

Grosvenor RFC set up a walking group in line with government social distancing measures, contributing steps both individually and with friends and family. Grosvenor members also submitted the most entries and the club placed third for number of steps. 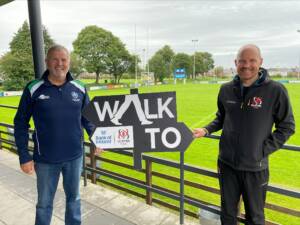 David O’Daly and Cathy Weston set themselves a challenge in a bid to raise funds for equipment for the club. Over the course of the last couple of months, Dave and Cathy walked from Virginia to Kingspan Stadium and back. They smashed their target by 30km and raised over €600 for the club. David and Cathy also provided weekly updates on the club’s social media channels. Thanks to their steps logged, along with other members, the club came 4th overall.

Hilary McLean from Belfast Harlequins RFC notched up the most steps in the Over-65s age group, while also placing first for the number of steps submitted by a female. Thanks to Hilary’s contribution, the club was fifth for overall steps logged. Hilary took many of her walks around local beauty spots and undertook the ‘Walk To’ challenge for the health benefits.

A huge well-done also goes to all participants and clubs who took part.