In our series, Behind the Player in association with Deloitte, Ulster’s Senior Women players share a little bit about themselves and their rugby careers.

This week, Ulster Rugby spoke to Cooke and Ulster prop, Sorcha Mac Laimhin, who is retiring from provincial rugby.

Tell us a little about your rugby pathway.

I first started playing rugby when I moved to Northern Ireland and went to university at Queen’s. My big sister played when she was at university and my dad was a rugby referee throughout my childhood, so I knew it was a good social environment. I wanted to make some friends, so I went along to the Freshers’ Fair and found the rugby team to sign up. I just wanted to join for the fun of it and to make friends. I didn’t know too much about playing rugby other than having to pass the ball backwards! I really enjoyed a couple of seasons learning about the game and playing with Queen’s Women.

In my second year at Queen’s in 2008, I played a match against Cavan and after the game, my coach told me that the Ulster coaches wanted me to go to training. I didn’t think I was very good or that it would be something I could pursue. It was a totally different environment to club training. That was the start of taking rugby a bit more seriously and trying to improve! I played in a friendly against the Army and was like a rabbit in the head lights! The following season, I was asked to go back and got my first cap for Ulster against Connacht.

After Queen’s I transferred to Belfast Harlequins where the coach, Nathan Moore was really keen to get another women’s team into the All-Ireland League. He talent-spotted the likes of Ashleigh Orchard (Baxter) and Nikki Caughey. We had a couple of cracking seasons there but unfortunately couldn’t get that promotion into the AIL. A number of us went to different clubs which was a real shame. It’s great now that Belfast Harlequins have a strong women’s section again and are doing well. It was at that point that I moved to Cooke where I’ve been playing since 2012.

Who have been the main influences throughout your rugby career?

My dad has definitely been a huge influence. He was always very sporty, and you always want to make your parents proud. He was keen for us to give rugby a go when it was an option at university. He’s a big influence, a huge supporter and even bigger critic! The whole reason I decided to start playing was because my sister played and had so much fun, so she has been a big influence too. I suppose the longer I’ve played, the more people I’ve come into contact with, the more reason I have to keep playing. Family is a huge part of that and for a lot of players, family is the reason they play and the support network for them too. 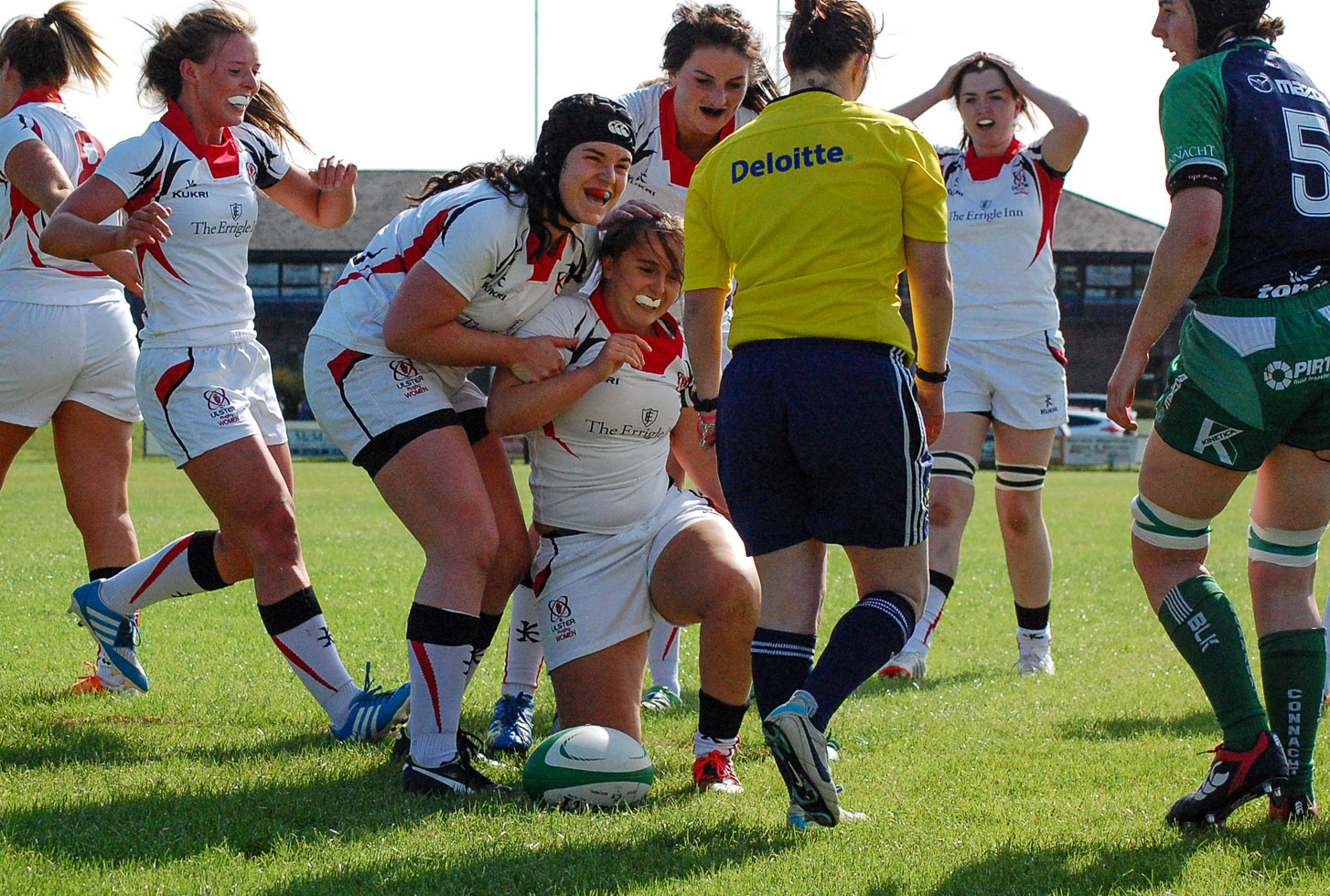 Have you had any barriers to overcome?

There are tons of challenges, definitely. Time management is a huge challenge for anybody playing a competitive sport, particularly at a high level. You have to be organised and manage your training, rest, and for a lot of us, your work or studies. For me, this season, looking after my little boy has been a big challenge! You do overcome them though; I’m really lucky that I have a great support network at home which has really helped this season. There have been challenges for women and girls’ rugby in Ireland – not just in Ulster – over the last decade or so. It’s come a long way but when I played in my first season in 2007, not everyone took us seriously. We weren’t considered to be athletes. At Harlequins, things were different because there was better support, but things were still different at that time in terms of access to gym and kit. I think a lot of teams have experienced similar challenges. Personally, the biggest challenge is managing my calendar around the rugby and the mental resilience to keep going to defy the people who don’t believe in you. This season, we’ve seen what I think to be huge successes and changes which makes all that hard work worth it.

Tell us about your experience with the Ulster squad in the recent Inter-Pros.

It was amazing. It was such a great squad to be involved with and such a good environment to be in. I rang Neal Johnston (Ulster Rugby Rugby Development Officer) when I was getting back to playing rugby. I had my son, Fiachra in September 2019 and about five months later, I played a match with Cooke’s 2nd XV. I was feeling physically pretty good and wanted some guidance on what I needed to do to get back into the Ulster set-up. Jonty said that Popcorn (Neill Alcorn, Head Coach) was leading the high-performance level and he told me to play my season with Cooke and work on my strength and conditioning to get myself back fit and there will be open selection for the Ulster squad.

February 2020 rolled around, and everything stopped. At the time, I thought I wasn’t going to get back in, but with hindsight for me, it was a huge opportunity because I had 10 months when I wasn’t playing matches so had time to recover properly from pregnancy, labour and birth and work on my strength and conditioning. I had a few weights and set up in the back garden in the decent weather to exercise. I was doing laps and shuttle runs out in my street! I got some advice from Diesel (Paul Heasley, Strength and Conditioning Coach) on what I should be doing. Aside from playing matches and training, I was doing everything I should have been; that really benefited me as I was in a good position fitness-wise and was ready to go back and have another go at selection.

When it came to team selection, we had conversations beforehand when we were told that if we didn’t get picked, we would have important roles to play. We went out onto the training pitch ahead of the first game against Munster, and Popcorn told those of us who weren’t playing that we’ve got to get the match-day squad ready to play. Being given that role – even if it seems small – changes the whole set-up. You feel important and valued. Little mindset changes like that have made it such an amazing experience and team to be part of. It’s been a really fulfilling experience. I feel like we worked really hard together on this.

It would be really hard to pin-point a single proudest moment and they vary. It’s always an absolute honour and joy to play for Ulster. You know that it’s a privilege and not everyone gets to do this, so it’s exciting to pull on the white jersey of Ulster.

I remember when I was 14 my first Ulster men’s match that I went to watch in the old Ravenhill in 2004 and it was a great environment. Ulster were playing Leicester Tigers and at the time, because I grew up in England, I was a Leicester Tigers fan! We travelled over to watch and were the only few people supporting Leicester among the Ulster fans. It was just deafening, and Ulster walloped Leicester that day, even when they brought Martin Johnston on!

Other proud moments are running out for your club. Your club is a great place to be and it’s where the grassroots rugby is. Getting to play All-Ireland League rugby is very exciting and something to be proud of. I absolutely love volunteering at Cooke – this year I’m Girls’ Youth Co-ordinator and I’ve also volunteered to coach girls’ rugby as well. It’s so fulfilling and great to be able to impart some wisdom into young players and see them grow. A parent sent me a picture of her daughter going to school dressed as me for World Book Day – I haven’t’ written a book but it was amazing that she wanted to be me! It put a huge smile on my face and made me realise I’m a role model for these girls. That’s something to be hugely proud of. 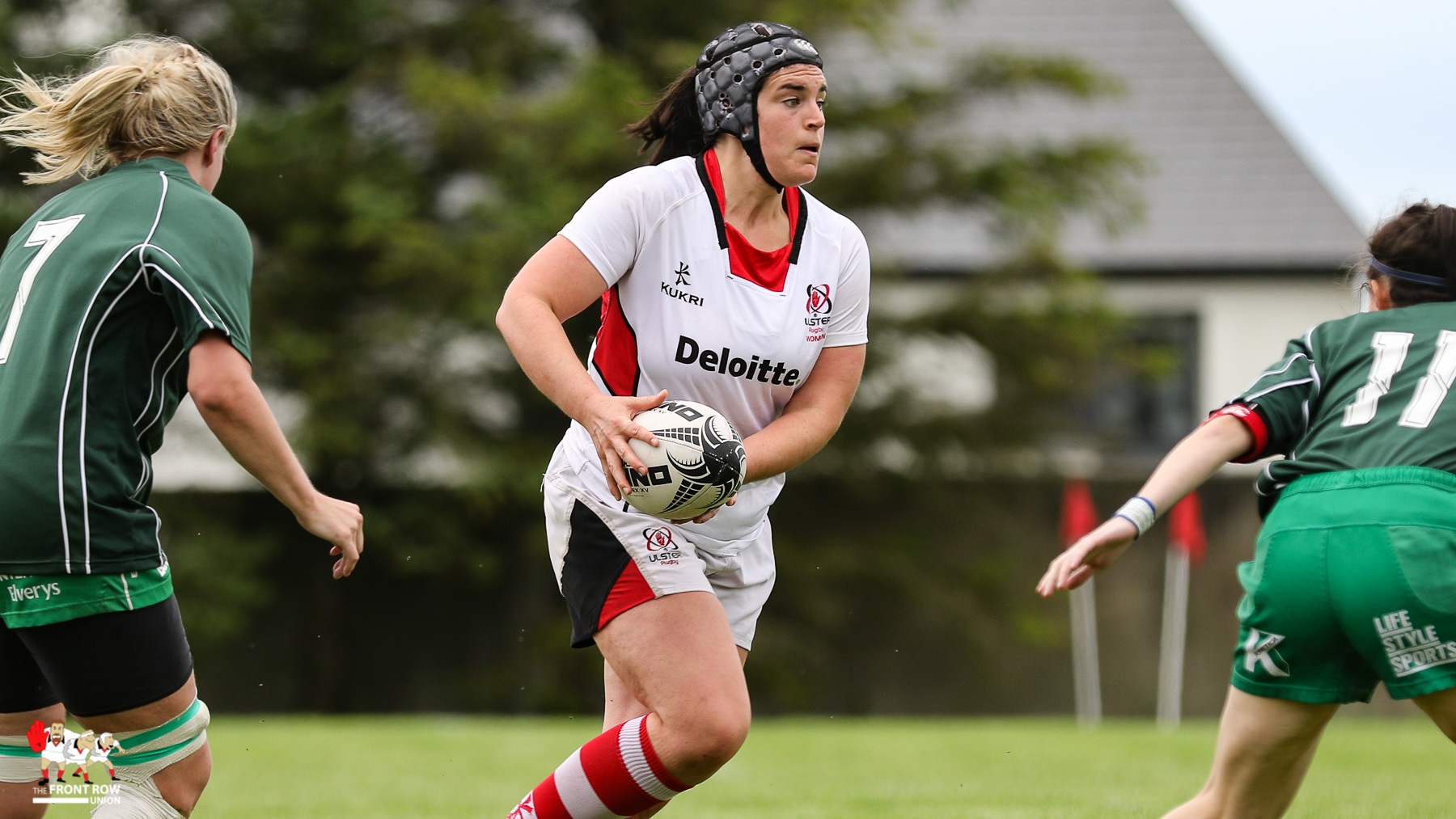 What are your plans now you have retired from provincial rugby?

I’m going to play a season with Cooke – we have an All-Ireland League to play which is very exciting to be involved in. It’s been a long time since I’ve got to play club rugby because of the pandemic and being out the year before that when I was pregnant, so I’m really looking forward to hopefully getting a full season. After that, my hopes are to have another baby. It’s a difficult thing to fit in when you’re a female athlete! It impacts athletes’ lives hugely because you’re taking a year-and-a-half out of your sport. After that, I’ll hopefully come back and play more club rugby. I always see myself playing club rugby and my family are so supportive. My husband lets me run out the door to manage a screaming toddler so I can go to training! So yes, a season of club rugby then some time out before coming back.

What advice would you give to a girl or woman who is thinking about taking up rugby?