McDowell played senior rugby at centre for North of Ireland Football Club (NIFC – now Belfast Harlequins) from 1987 to 1990 before a serious knee injury cut short his rugby playing career. In 1992, Simon was travelling with his club to attend the Melrose Sevens. The Jed-Forest vs. North Cavaliers game was without a referee and so Simon volunteered to take the whistle.

“The refereeing nearly started by accident,” said McDowell. “I was there as a spectator and was asked to give it a go. I had to get a pair of trainers, a polo shirt and someone gave me a whistle! I thought I gave North everything but they got absolutely hammered, so it was a difficult weekend for me!

“That game gave me an interest, and I had some encouragement from a couple of retired referees at North, Eric Twaddell and Brian Fitzgerald who unfortunately have both since passed away. They told me that I could give it a go and that it’s a good hobby. I was a bit young to take up coaching but I wanted to stay involved in rugby, but to get respect from players older than me, I tried the reffing.”

He then attended the Ulster Society of Rugby Football Referees summer course in Belfast to learn more about the Laws and joined the whistlers to give it a go. After that first season in 1992/93, the challenge to progress up the refereeing ranks was to continue for McDowell.

“Right from the start, the Society [USRFR] is very supportive with a system of volunteers who are putting in hours and hours voluntarily per week to try and help younger referees to develop them. You would be very surprised at how much work goes on to help improve refs so they can serve rugby at a domestic level or higher. The older referees and those who have retired would then coach a ref, assess him or her, go to games and meetings. They are always encouraging and helping the ref learn by their mistakes and their experiences.”

Simon was invited to join the IRFU National panel of referees in 1997 and refereeing All-Ireland League was the next step leading to professional rugby. In 2002, Simon was selected for his first Magners League game, Cardiff v Glasgow. This was soon followed by his first International World Cup Qualifier game Netherlands v Czech Republic, and later, his first Heineken Cup game, Viadana v Gloucester.

McDowell gained rugby experience in more than 20 countries around the world, including Guinness PRO14, Heineken Champions Cup, U19, U21, A, Women’s and Sevens Internationals.

Having been appointed to the World Rugby referee panel in 2003, McDowell was involved for 17 years as an Assistant Referee and TMO in over 100 tests, including the Six Nations, The Rugby Championship, the 2007 and 2011 Rugby World Cups.

“I started to referee international games in 2003. Then, I did refereeing, assistant refereeing and TMO duties until around 2012 when I decided not to be on the field anymore. The time was right to concentrate on TMO only until 2020. Part of that comes with age!

“It’s very different to refereeing on the pitch, because the referee can get decisions right and he or she will get them wrong. The TMO has very few decisions to make, and you can’t really get any wrong. When you have a difficult decision to make, sometimes a group of people would be split on whether the TMO’s decision is right or wrong. It’s difficult when it’s in the middle and you have to tell the referee what your decision is. Sometimes they’re not necessarily wrong, but they’re not right either which can lead to a bit of controversy!”

Simon’s match official highlights include refereeing the 2002 U21 Rugby World Cup Final at Ellis Park in Johannesburg, Hong Kong Sevens in 2004, the World Games Sevens Final 2005 in Duisburg, the Womens Rugby World Cup final 2006 in Edmonton, the Churchill Cup final 2008 in Chicago and being Assistant Referee for two World Cups. He was also fortunate to experience two Danske Bank Ulster Schools’ Cup Finals in 2000 and 2008.

“The two World Cups in France 2007 and New Zealand in 2011 were amazing experiences. Going to a country hosting the World Cup and experiencing that country from a rugby point-of-view was fantastic. When they say New Zealand is all about rugby, there are 5 million people and they all understand rugby, it’s very true. It’s not just on the back pages of the papers, it’s on the front pages as well. The people are so welcoming; once you’re involved in rugby, that’s all they want to talk about and they want to host and look after you. It was a great experience all-round.

“Another highlight for me was refereeing two Ulster Schools’ Cup finals. It’s an important day for the players but also the referee. It’s great to be involved and be part of that. It was a real pleasure.”

Now he hopes his experience will still be of value at a local level to help coach other referees.

“The time was right for me to move on. I’ve had a great run at the refereeing and rugby has been very good to me throughout the years. I’m going to now try and help with some of the referees in the Ulster Society by doing a bit of coaching and passing on some of my experience. There’s always a role for a referee even when they get older!

“Anybody can be a referee. If you want to give something back to the game, it’s a great thing to do. The game of rugby can’t take place without a referee unlike other sports. What you can find very quickly is the enjoyment comes from the challenge, because it’s not always easy. You’ve got to give it a go. You’ll get a lot of support from the Society and if you like a challenge, you’ll enjoy it and want to get better.” 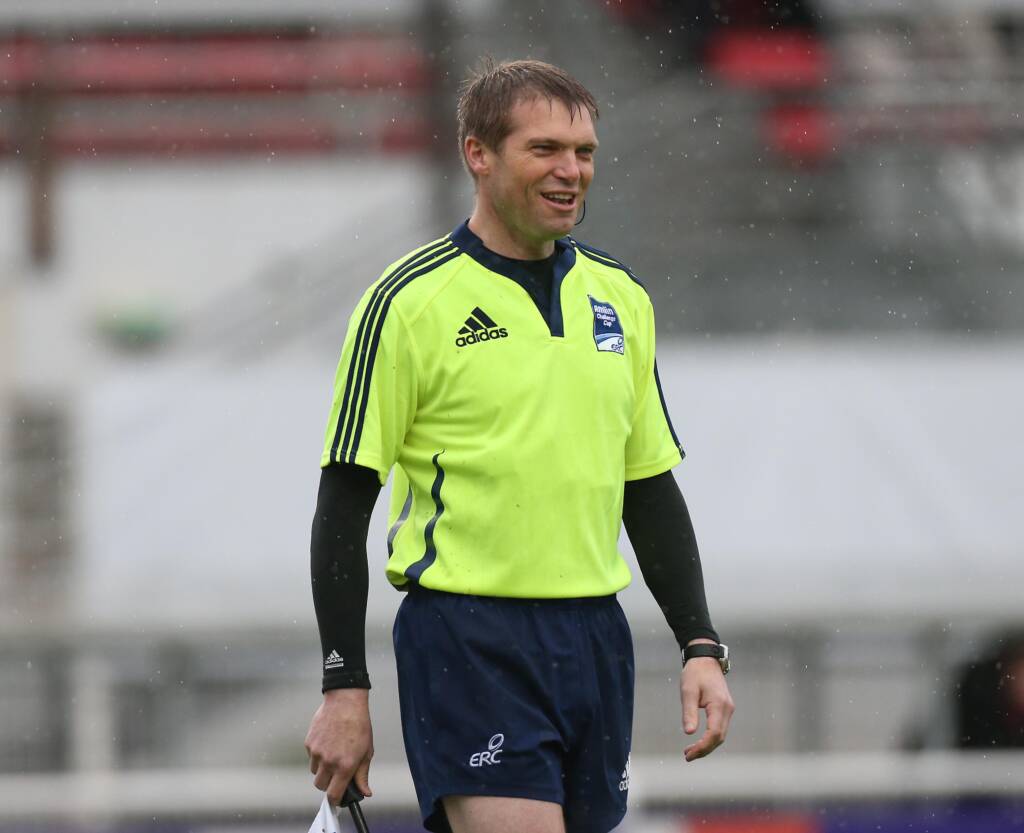