Ahead of Ulster A’s Inter-pro clash with Munster A this afternoon, Academy Manager, Kieran Campbell provides an update on what the squad has been up to since the resumption of training.

“We’ve been working in pretty strange circumstances. We operated in our own bubble at Newforge to begin with when we made an initial return to training, with a heavy focus on development and athletic performance. We then fortunately got to integrate with the senior Ulster squad at Kingspan Stadium. That has been great; Dan McFarland and his coaching team have been excellent in supporting us and bringing the boys through. We’ve had a long period of training with the senior team which gives the guys an opportunity to understand what it takes to be a senior professional.

“We had the ‘A’ game against Leinster ‘A’ in which the guys performed very well. It wasn’t just the result but the nature of the performance which showed huge advancement in the players’ development. After the match against Leinster A, there was a build-up to the IRFU Sevens tournament, which was a different format to what the players were used to, but they did really well and developed well from that competition.

“We’re looking forward now to the two ‘A’ games coming up against both Munster and Connacht now.”

Ulster got their first ‘A’ Inter-Pro game of the 2020-21 season off to a superb start after defeating Leinster 14-29 at the RDS Arena tonight. #LEIvULShttps://t.co/11VMp8KpWv

Ulster had three hugely successful weekends playing in the IRFU Sevens tournament, which Campbell felt came at the perfect time for the Academy in terms of player development and the opportunity for competitive rugby while club rugby has paused.

“It’s one thing to be training – and certainly the guys and staff have been invested heavily in that – but I think having a competitive outlet and having the opportunity to play rugby is significant. The players need to be able to benchmark themselves, as well as deliver in a competitive environment. Although it was a different format, it provided us with a lot of individual player improvements.

“Sevens demands more of individual performances than the collective performances in 15s rugby. It has allowed the players to condition themselves for a return to rugby in an appropriate environment too. It was an important intervention at a time when we were struggling to provide a competitive outlet for our players.” 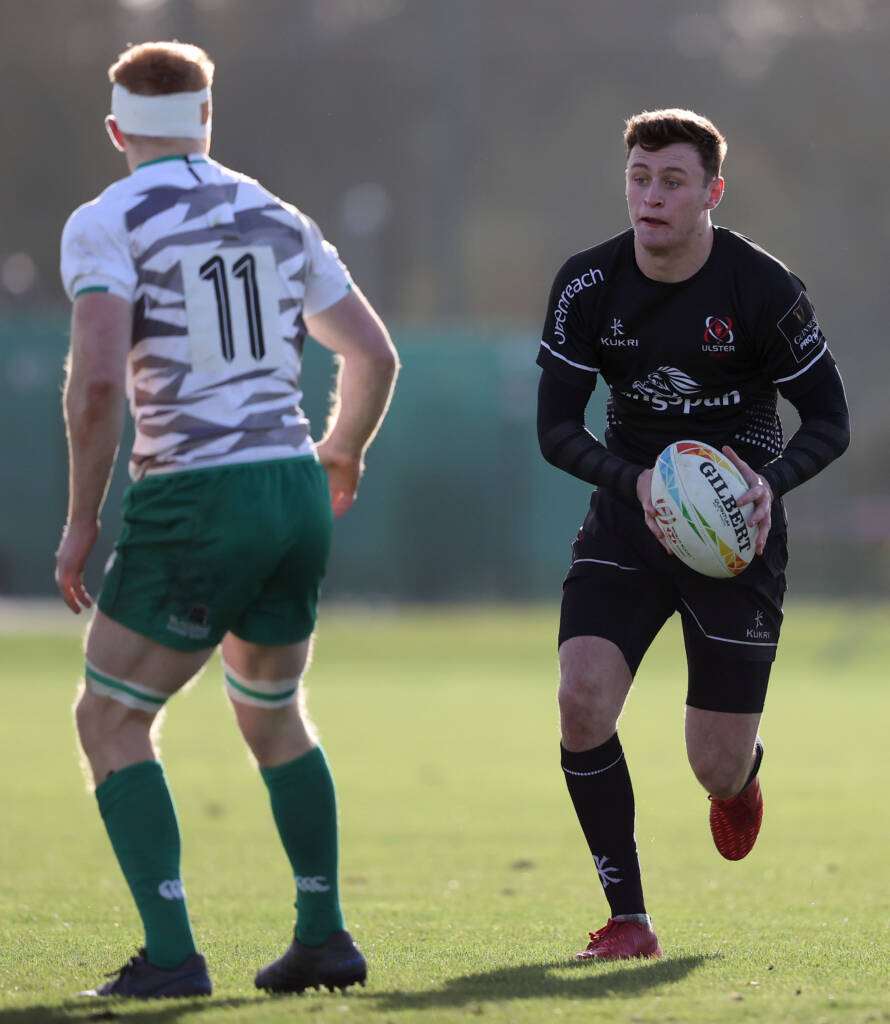 Campbell and his team have a busy schedule over the next few weeks and months, with a number of Inter-Pro ‘A’ fixtures in December and January; not to mention the Ireland U20 Six Nations, which several Academy players will be hoping to get the nod for.

“We’ve got a couple of tough games coming up with Munster and Connacht starting this week. We’re all really looking forward to that; it’s good to keep getting those opportunities to play competitive rugby. They’re important games for our guys; they’re in a good position at the moment and there’s a keen eye on the young guys from Dan and the senior coaching squad. He’s prepared to give them opportunities, but they have to perform. Dan talks about that ‘fight for every inch’ and ‘squeeze every drop’ mentality, and the players are certainly going to have to deliver that in the next couple of weeks. Dan will be looking for those individuals before recognising them with senior rugby. That’s a great opportunity for them in this period.

“We have those two games coming up and a third game against Leinster in January. That will add a bit of excitement because I’m sure they won’t go too easy after we beat them in Dublin! Outside of that, we have the Irish U20s Six Nations coming up; we’ve a number of players who are in line for selection, so it’s important they stay on track for that too. There’s going to be a lot of application needed from the Academy staff team to make sure the players deliver to the best of their ability. There’s a lot of exciting stuff coming up for us!”

Click here to see the Ulster ‘A’ squad named to face Munster this afternoon, kick-off 4.30pm.