We are delighted to be welcoming 500 supporters to Kingspan Stadium on Friday. To ensure a safe and enjoyable experience for all supporters, staff and stewards, Ulster Rugby has launched a COVID-19 Spectator Code of Conduct.

Supporters should also familiarise themselves with the Kingspan Stadium regulations and the NI Executive public health advice at nidirect.gov.uk/coronavirus.

Both the entering and exiting of the stadium will be phased to ensure the free flow of supporters. 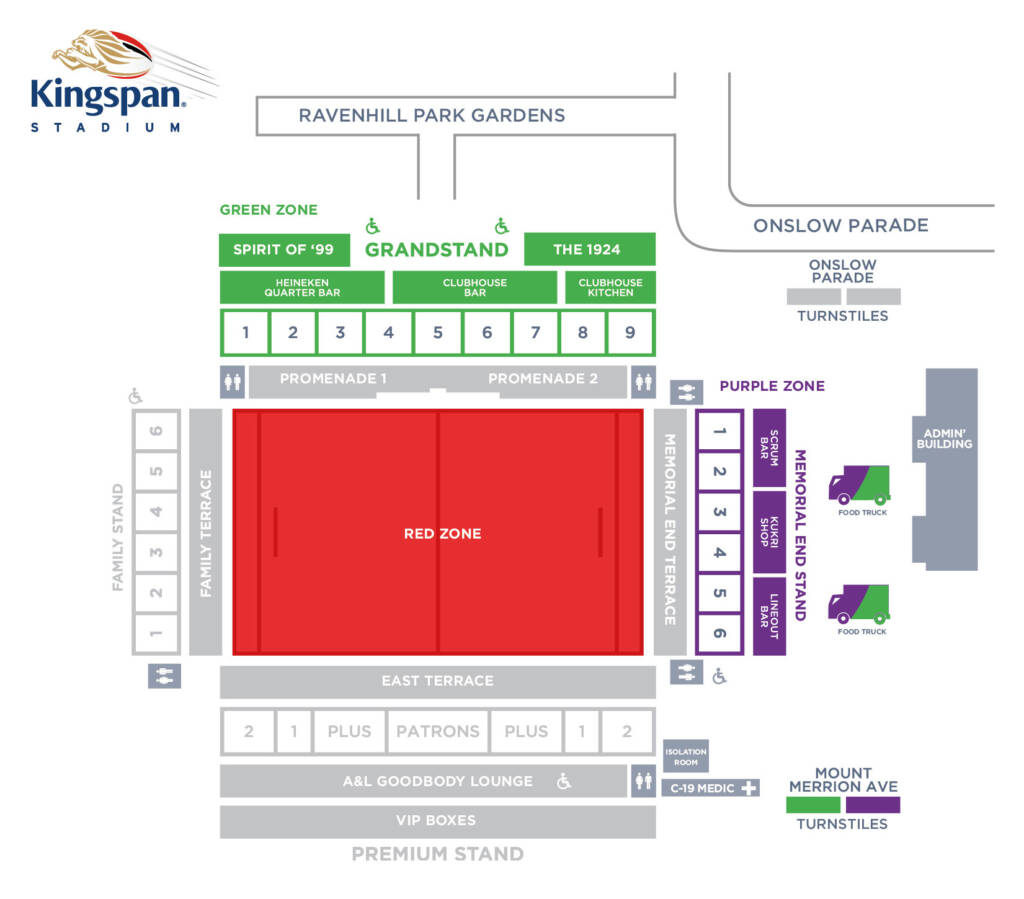 Watch the video below for some more details on the measures taken to ensure a safe and enjoyable match-day experience for supporters returning to Kingspan Stadium.

Supporters attending the game should have your ticket ready for contactless entry when they approach the stadium.

More info on using Account Manager can be found here.

Here is your Ulster team for Friday’s showdown… 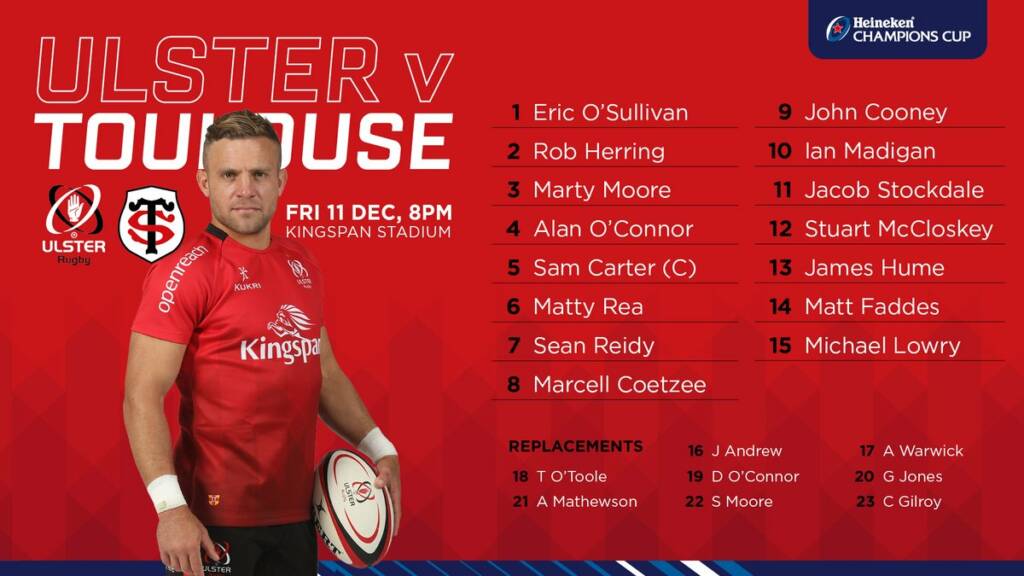 And here is the Toulouse team that will travel to Belfast…

There will be limited catering and retail facilities available on Friday. All stadium bars will remain closed.

Friday 11 December is also National Christmas Jumper Day, so we’d love to see some supporters wearing their favourite Christmas jumpers, hats or other accessories at Kingspan Stadium. If they’re red and white, even better!

If you like, you can also support our official Charity Partner, Extern’s Christmas jumper campaign by donating £2/€2 at extern.org.

The Cool FM Crew will also be in attendance, playing a selection of festive themed music to get you in the spirit! 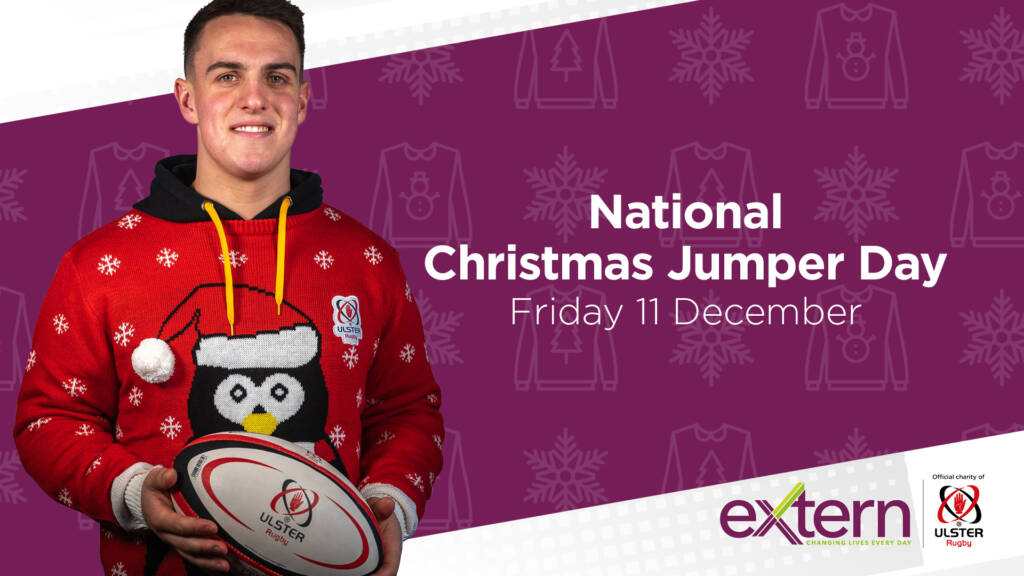 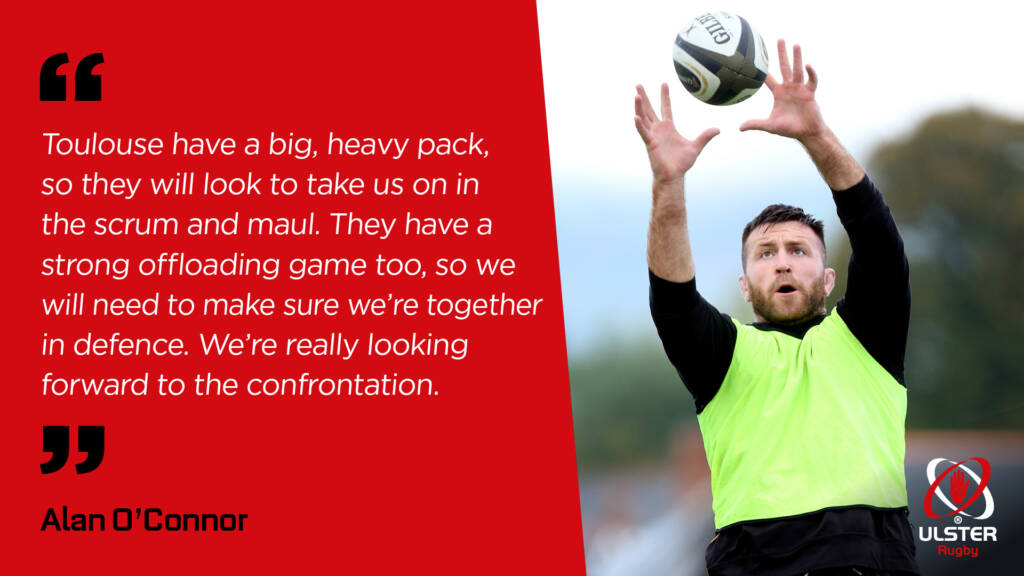 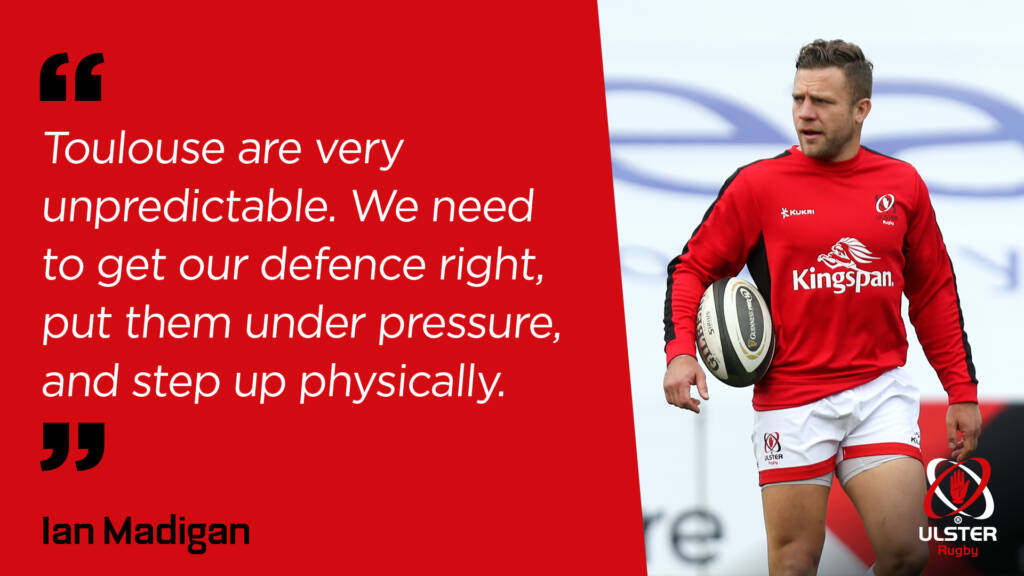 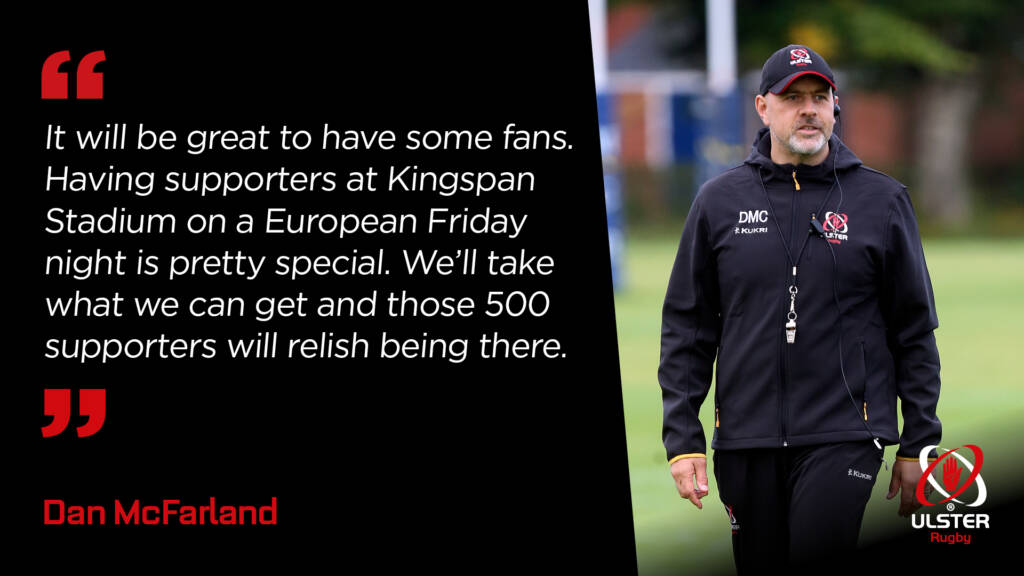 The 2020/21 Heineken Champions Cup will be competed for by 24 clubs with the eight highest-ranked representatives from the Gallagher Premiership, the Guinness PRO14 and the TOP 14 securing their places.

The clubs were divided into two pools of 12 by means of a draw and the tournament will be played over eight weekends with four rounds of matches in the pool stage followed by a knockout stage consisting of home and away quarter-finals, semi-finals and the final in Marseille on 22 May 2021. 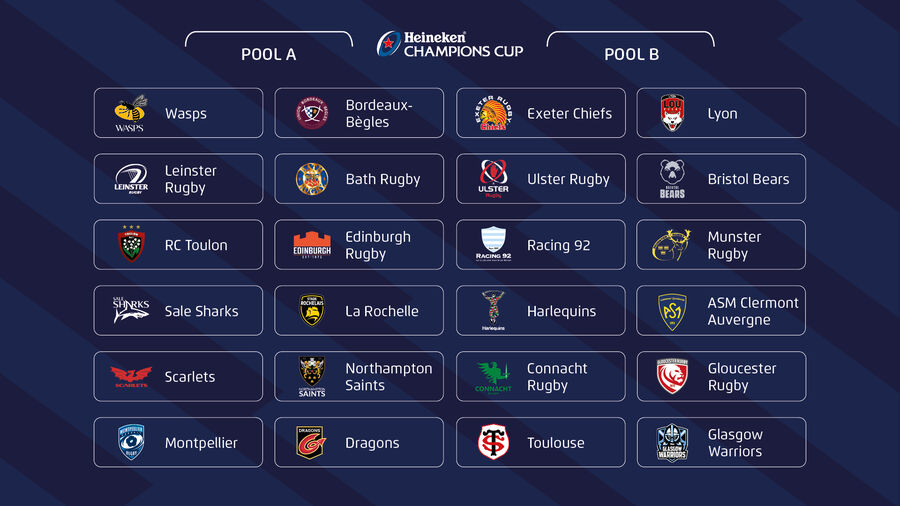 Ulster will face Toulouse and Gloucester, and will play both teams home and away either side of Christmas. 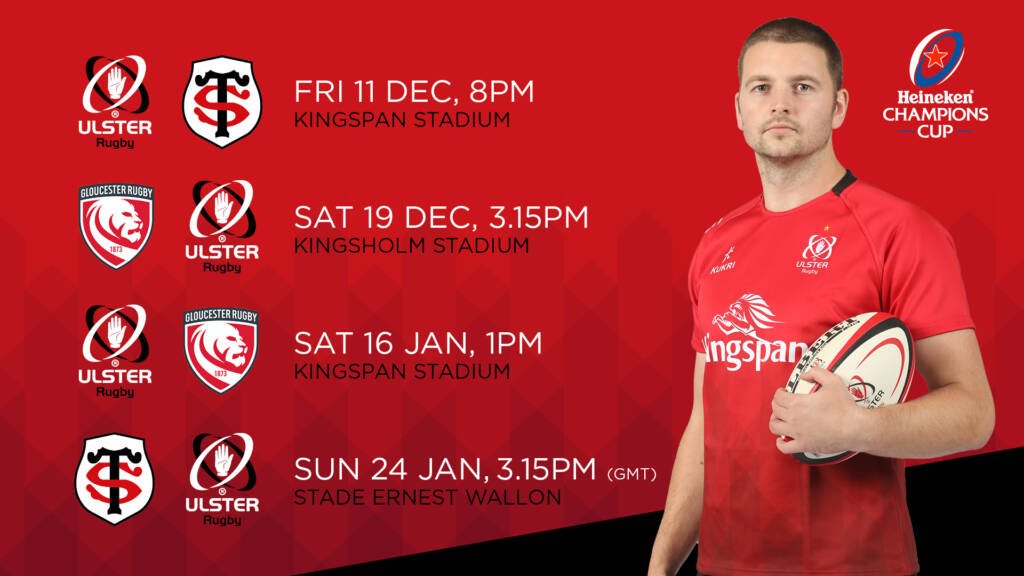 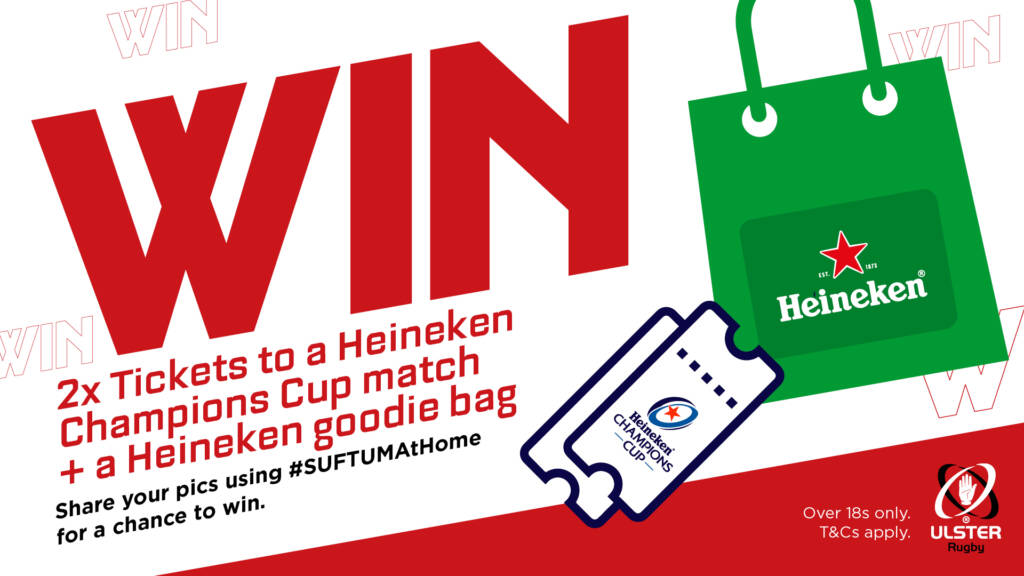 Our partners at Heineken are offering a pair of tickets to a future Ulster Rugby Heineken Champions Cup fixture at Kingspan Stadium plus a Heineken goodie bag to one lucky winner.

To be in with a chance of winning, simply post a picture of yourself on Twitter, Instagram or Facebook supporting Ulster at home this weekend, along with the hashtag #SUFTUMAtHome – then we’ll pick the best entry.

Create your own match-day – to help you get you started, we’ve created a downloadable #SUFTUMAtHome Heineken Champions Cup Supporters Pack, including Ulster Rugby bunting, flags and other fun decorations and games for all the family.

It has been less than two months since Ulster and Toulouse locked horns in the quarter-finals of the 2019/20 Heineken Champions Cup. On that occasion, the home side powered to an impressive win at the Stade Ernest Wallon to end Ulster’s interest in the competition.