My family always make fun of me because when I was a kid, I tried every sport going. They would always say as soon as I got the kit, I left and moved onto the next club or sport! It wasn’t until I was about 14, my school started tag rugby. We participated in different competitions, and one of those took place at Malone Rugby Club. The Malone coaches of the U18s team were there and asked a few of us if we would be interested in playing contact.I had always wanted to try it. My cousin (Neil Best) played for Ulster and Ireland around that time and I was always watching him at games. I went to training that week and never looked back!

I played with Malone U18s until I went to Stirling University and played there as well as Stirling County RFC. During that time, I played with the Irish Exiles on a tour to Ireland, playing Leinster and Munster. It was really hard-going playing two Inter-Pros in a weekend!

When I came home, I played at Queen’s University for a year. It was a great season when they got promoted to the All-Ireland League. I went to Australia to do some travelling and played a season of rugby in Sydney with Waverley RFC. It was fantastic.

After travelling, I joined Cooke RFC and played in the All-Ireland League for two years before moving back to Malone.

I got my first Ulster cap the year I finished university in 2014, and have been part of the squad since then.

Who have been the main influences in your rugby career?

My parents, first of all. My dad drove me all over Ireland to go to Ulster U18 training camps. We trained all over the place; Enniskillen, Letterkenny, everywhere! My parents would come to nearly all our games as far as Dublin. They have been really supportive of me.

My cousin, Neil was another influence. I grew up watching him play and that’s how I got interested in rugby. I have my auntie to thank for taking me to Ulster games; I don’t think if I didn’t go to watch Neil play, I wouldn’t have had the same urge to give rugby a go.

All the rugby girls are a huge influence too. You play for yourself but you also play for your team-mates. I’m still best friends with girls I met in that first training session I went to at Malone when I was 14 or 15.

I’ve always been quite lucky in the sense that the majority of clubs I’ve played for have always supported their women and girls’ teams. Malone is 100% behind the women and they’d do anything to help us out. The only thing that has been a barrier has been trying to balance work, training and games, especially working shifts. I’ve had to use my annual leave for games and training. A few years ago, the reason I left Cooke was because when we got our fixtures for the season, I realised I was going to be working when most of the games where scheduled. I asked about the possibility of dual status, playing for both Cooke and Malone, but they weren’t able to accommodate that, so I made the decision to move to Malone and move down a league. That was tough as I went from playing in the All-Ireland League to an Ulster League, in which teams struggled for numbers and games weren’t as regular.

I did end up playing dual with Old Belvedere for a season but the travel made it logistically difficult. I was really thankful for the couple of games they gave me, playing at that higher level. I was lucky this season that the fixtures fell on my days off.

I’ve never really had an issue with friends not understanding that I have to go to training and give up my weekends. All my closest friends would be rugby girls and so they have always understood.

It’s been a bit of a blur! It’s hard to believe the time that has passed. I was working for the first month when COVID-19 set in, then when I went on furlough, I think I went to every dog-walking spot in Belfast. When it was allowed, a few of the rugby girls and I would meet up to take the dogs to different spots for walks.

I’ve been having a lot of the usual Zoom calls and quizzes. I’ve done quite a lot of online shopping too; I sometimes can’t remember what packages arrive at the door! 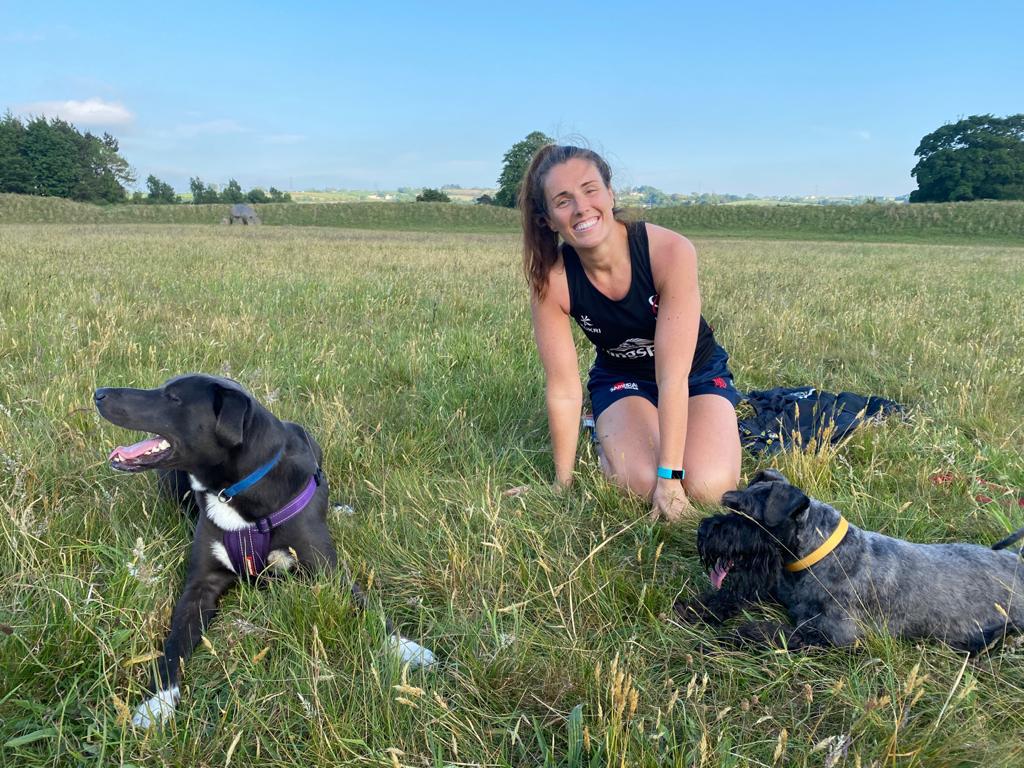 I really enjoy exercise like CrossFit-style workouts. Staying motivated hasn’t really been a problem for me. We didn’t know when pre-season would start, so my worst nightmare would be getting told a week before pre-season without having done any exercise. I’ve tried to stay as fit as possible doing a few workouts each week.

My friends and I have a WhatsApp group and Diesel (Paul Heasley) our Strength and Conditioning coach has given us a programme to do at home. That makes us accountable and gives us something we should be doing each week to keep our fitness levels up. Now we have our runs and conditioning to fit in as well. There are of course days when I felt unmotivated and fed up with being stuck in the house, but I just had to remind myself that everyone was in the same position. Going out for a walk or 20-minute workout really helped boost my morale. It helped that the weather was good too. 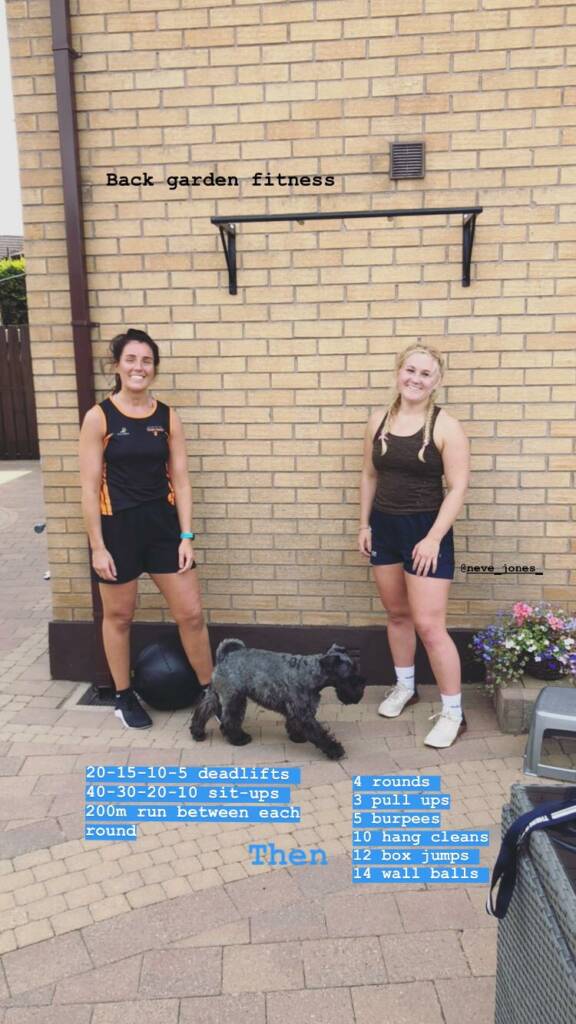 Everything in moderation works for me. If I want a chocolate biscuit and a cup of tea, I’ll have one. I’ve made a chicken and chorizo tagliatelle which has probably been the best dish I made. I tried to make a paella which didn’t really work – it was a bit dry so I’ll maybe give it another go to see if it works out this time! 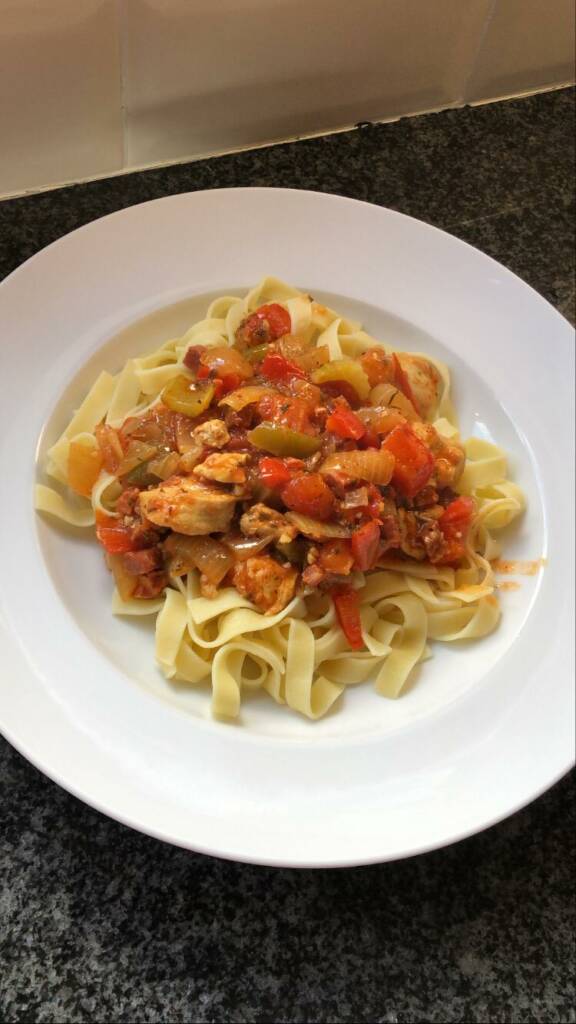 To relax, I would probably run a nice bubble bath, read a book or watch Netflix and just chill out. I got really into hot yoga before COVID-19; going into a sweaty room with strangers scared be a little so I haven’t been for a while! There are lots of YouTube yoga sessions that are around 15-20 minutes long; it’s nice to shut the door and clear your head, get your breathing right and reduce your anxiety for a while. Sometimes the dog eats my hair though so I have to shut him out! A nice walk in fresh air would really calm me down too.

What are you looking forward to the most about a return to rugby?

Getting out with my friends again, passing the ball around. It was so nice when we could start to meet up; Neve Jones, Hannah Beattie and I went to the beach and threw the ball about, doing two-on-ones. I missed that so much. I just can’t wait to get back into a team atmosphere again. Training on your own is difficult; having others to motivate you is great. That’s why we play team sport. It will be brilliant to get back to training and have a game we can set our sights on. I’m maybe not looking forward to pre-season sprints but they have to be done!

I’ve been reading quite a lot in the last few months. The top three books would have been really girly! ‘Everything I Know About Love’ is one – it’s been passed around my friendship group and we’ve all loved it because it’s so relatable. ‘The Flat Share’ is really good too. Another I read recently is called ‘Pretending’ by Holly Bourne.

I watched the new Will Ferrell film, ‘Eurovision Song Contest: The Story of Fire Saga’. It was an easy watch and really funny. ‘Now They See Us’ was a really good series too. I’ve watched a lot of ‘Friends’ on repeat for comfort!

Any time I’ve put on the Ulster jersey has been a proud moment for me. In terms of club rugby, Malone’s first All-Ireland League win against Galwegians in January was a special memory. We had a tough introduction to All-Ireland rugby but getting that win really brought in some positivity to the squad. It really proved to us as a team that we deserved to be playing at a higher level. It’s a shame it was cut short as we were making real progress and it would have been interesting to see where we might have ended up. It will be good going into this season with 10 teams in the league. We will be having a shortened season but hopefully we can train well and play well in the first half of the season and go into the All-Ireland League competing with the likes of UL Bohs and Railway Union. 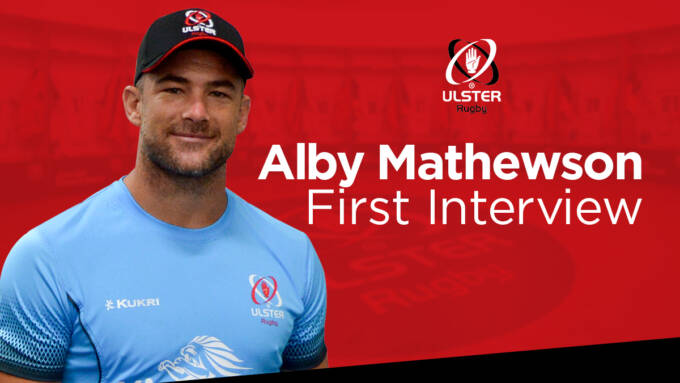