It has been another busy year on and off the field for the Abbey Insurance Ulster Rugby Academy, and it has been a largely positive one, as Kieran Campbell, Academy Manager reflects:

“It’s been another successful season, particularly in terms of the number of Academy players who have transitioned into the senior team,” said Campbell.

“They’ve done really well in that environment and I think that has been reflected not only in their performances, but in how they’ve contributed to good victories both in the PRO14 and the Champions Cup.

“I think that has to be attributed to improved transition of players led by [Head Coach] Dan McFarland into the senior setup. The guys are learning incredibly quickly in that environment thanks to Dan and the other senior coaches and also making significant improvements to their game.” 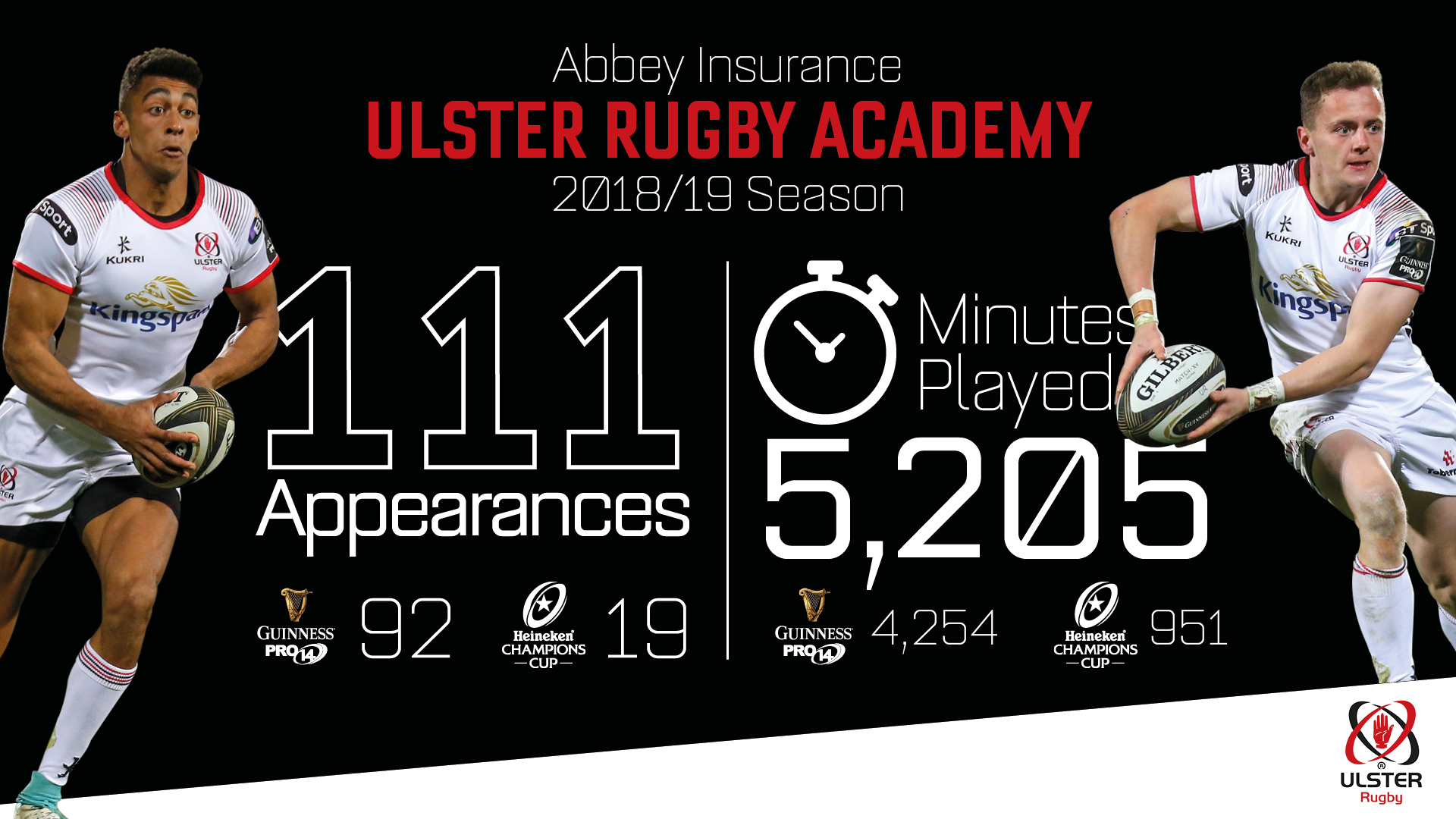 The successful transition of players from the Academy squad into the Ulster senior team has certainly been one of the highlights of the season, with Academy players making an outstanding 111 appearances in Guinness PRO14 and Heineken Champions Cup competition. As Campbell explains, this was not by chance.

“Fourteen Academy players trained regularly with the seniors this year and Dan and [Scrum Coach] Aaron Dundon also ran a scrum clinic every week with the Academy and sub-Academy players alongside the senior front row.

“The Academy players also trained with the senior players not involved in match-day squads each Friday, so that has really helped accelerate their development and given the senior coaches and staff the opportunity to get to know them better. In addition to that, we’ve developed what we’ve called ‘the critical drop groups’ so the senior coaches now know exactly what the Academy players need to work on at every session to ensure they are constantly developing and this is done after sessions three times a week.” 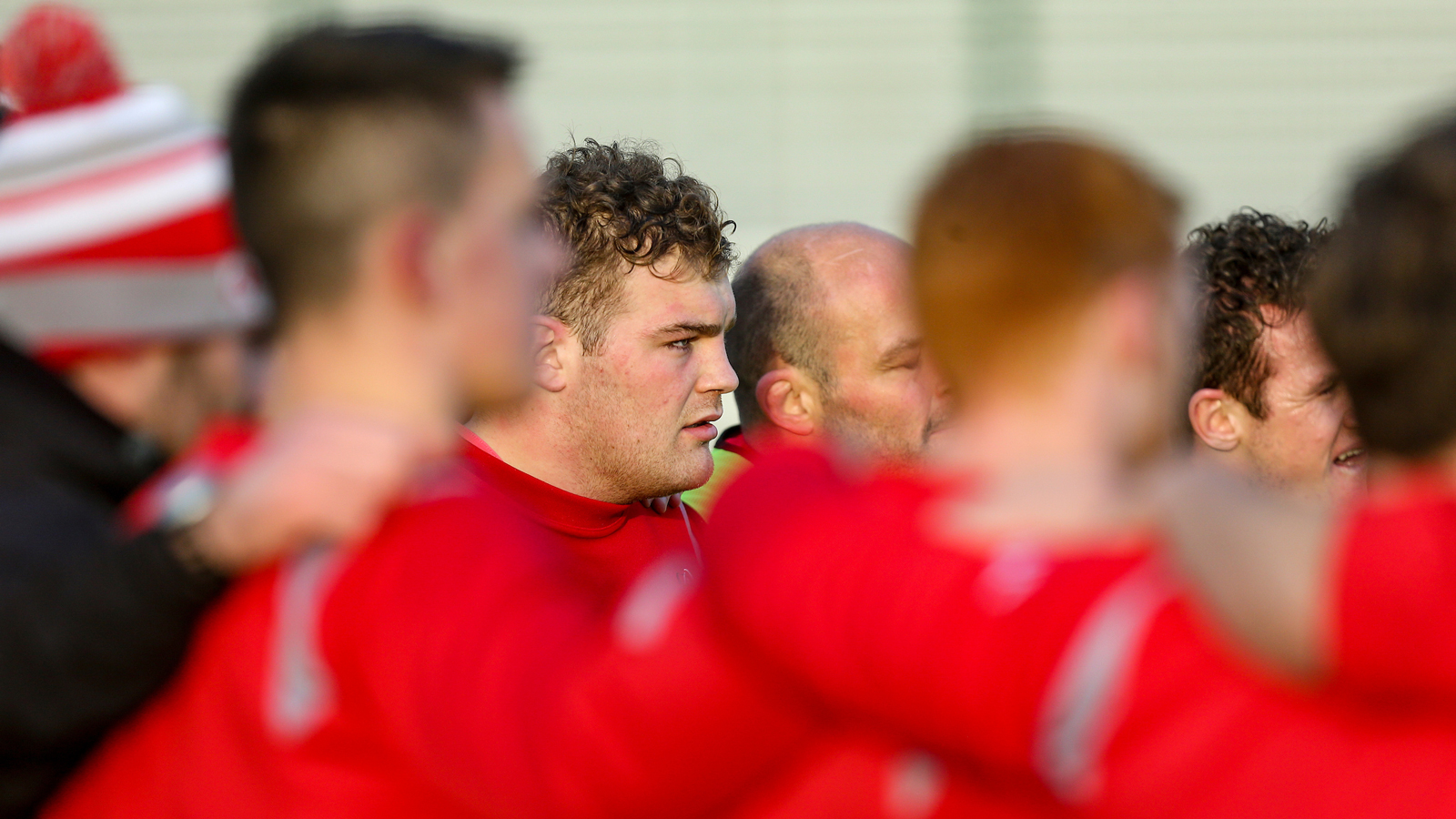 The Ulster A team, sponsored by CD Group, once again proved to be a useful outlet for the young Academy players to test themselves at a more challenging level.

“We made a strategic decision between the Academy and senior staff that it would be a young Ulster A team this year and we’ve built our depth again through that. On average we had 16 Academy or sub-Academy players per Ulster A squad and have had reasonable success, winning five of the seven Celtic Cup games.

“Going across to the Cara Cup in America was a fantastic experience for a lot of those players to travel as a group and have a really intense week with two tough fixtures, so that was another great learning opportunity for those guys.”

#CelticCup Highlights | Watch all 9 tries as Ulster A, sponsored by @CD_Group, defeat Connacht A 12-49 in the final round of the Celtic Cup on Sunday afternoon… pic.twitter.com/bL0CXV56Mj

Further down the player pathway, Ulster have enjoyed significant growth at national age-grade level in recent years, and have been well represented again this year.

“We’ve also had players involved in the Irish U20s Six Nations Grand Slam success and five going to the U20 World Championships so I think in general it’s been another move in the right direction this year and it’s something positive that we can build on going forward.”

📸 | Congrats to our U20 Six Nations Grand Slam champs🥇🙌

Off the field, a significant review of the Academy also took place this year, with the view of creating a sustainable, high-performing environment that will be a key asset to Ulster and Irish rugby, as Campbell explains:

“Obviously we’ve got a lot of key stakeholders – the Academy is very much a shared development space because not only do you have the Academy and senior players, but you’ve also got clubs and schools involved in the progress of each player.

“Therefore, it was important for the review that we involved Simon Best from a club perspective, Stephen Black from the schools and we also brought in two external people in Hugh McCaughey and Jo Hopkins, who is a consultant with the British Olympic programme, because we wanted to get an external high performance view on how we were developing, in terms of our processes within the Academy.

“We also spent some time visiting other high performances models to compare with our own and see if there was anything that we could improve in. We took those key people with us and we visited Exeter Chiefs, Saracens and Arsenal, and, with Jo there, we did a comparison with the British Olympic model as well.

“What did we learn from it? We learned that our own processes are actually pretty good but we also came back with some key areas for development and some of that has been in the transition processes that we’ve looked at between ourselves and the seniors.

Nice welcome for the Rea brothers back into the changing rooms! Incredible performance from Abbey Insurance Academy player Marcus Rea – Man of the Match award on his debut 👏

“We also looked at developing our coaching network and our Talent Coach programme, and that is something that we have put a real emphasis on this year – to develop a succession plan of quality coaches. We’re realistic in acknowledging that the power of what we deliver on the playing field can only be increased in line with the quality of coaches that we have working with the players at all the key levels.

“In terms of culture and environment, we’ve adopted the ‘fight for every inch’ and ‘squeeze every drop’ ethos from Dan [McFarland] – it was something we noticed particularly at Exeter and Saracens where they have such a strong, consistent culture throughout their teams so it is something that we will be pushing right down into our age grade squads from the very top. I think that is bearing fruit as well because it is creating an environment where guys are really striving to enhance their performance and that is obviously reflected in the number of national age grade jerseys and Ulster senior caps we’re getting and also results like the U19s beating the Australia national side.”

FT | Ulster U19 22 Australia Schools 17 – an unconverted try from George Saunderson gave Ulster a. 15-10 lead. Aus went under the posts with 15 mins to go 15-17. A try in the final seconds from Conor Rankin converted by Doak sealed the victory. pic.twitter.com/jWQdqvzWCW

Despite another successful season in the books, Campbell is optimistic that there is still room for improvement next year.

“I think we have progressed well but there is still an opportunity to grow again next year. We had 10 Academy players capped for the seniors this year with more than 100 caps, which is great, and is more than any other PRO14 team. Of that, five of those guys have been regularly featuring in the senior team every week, so that’s been great progress but we’ve got a long way to go.

Arguably the most competitive category of the night, the Abbey Insurance Ulster Academy Player of the Year award, has been won by @michaellowry15.

Congratulations to Michael and also nominees Robert Baloucoune and Angus Kernohan who have all enjoyed outstanding season’s. pic.twitter.com/OQPNw6xEWk

“I know Dan [McFarland] will be wanting to aim higher than just PRO14 semi-finals. We’ll want to be delivering more national jerseys than we are and being successful with the Ulster A team, and in terms of our actual pathway, we need to keep building on our culture, which is really developing well.

“I think with all that work we’re growing the quality mass of players who can support the 1st XV. We’re very neat in our succession planning and we’re very clear in the areas that we need to create players for the senior team to help make them successful. Those are all very important areas of development and we will hopefully see a greater growth in how our programme delivers over the next few years.”